What a great weekend we had!

Friday night I took Kirra to our cousin Bella’s Figure Skating show and Kirra was mesmerized! That’s all she could talk about the rest of the weekend was figure skating herself.  Bella was in two numbers, and did a very cute job.

Saturday I woke up and went garage sailing around with Theo! I found some old vintage cameras to put on display, a few old books, and a huge bin full of little people for Kirra which is great since she still really loves little people! We got to keep the rubber maid bin too which makes Jason and I happy for easy cleanup!

Today is lounge around day for the most part. Jason was a hero and let me sleep in until almost noon! Kirra came in about every 30 minutes though starting at 10: 00 a.m. asking about ice skating! We did go about 1pm and she had fun! She even did the pusher a lot by herself this time too which saved my back! 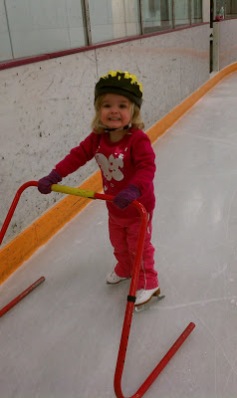 Once we got in the car she informed me that was fun but she wants to do gymnastics instead. She is such a silly girl.  We went home had a snack unloaded groceries that came from Coborns (which by the way is AWESOME) and she’s napping now, and I am cleaning,couponing and blogging!

Time to make tacos for dinner, and play little people!