Welcome to the start of summer! You’d hardly even know that it was summer instead of late September by the wet and rainy weather we’ve been having, but I can’t complain too much, we’ve hardly had to turn on our wall unit air-conditioner, so its all relative I suppose. Today was actually very hot and muggy though. Here’s what’s new with us!

The chicks have finally gone to roost in their new home, and it couldn’t have come a moment sooner. They now have many of their real feathers and have lost a lot of their down. They are approximately three weeks now and are on a grower ration of food. (Not medicated)  Today one even flew the coop when I was changing their water in the brooder, so it was definitely time to move to their new digs. They now have a lot of space to roam around in, and I think my husband can’t be happier that the project is done and now he can actually enjoy his evenings. I love him so much for it. The chicks are very happy too! 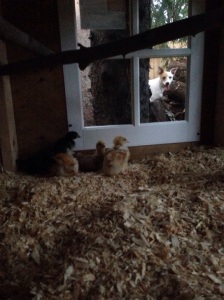 We have our eye on you Sadie! 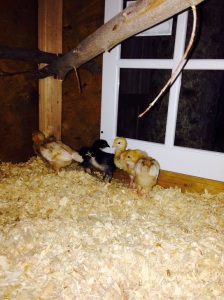 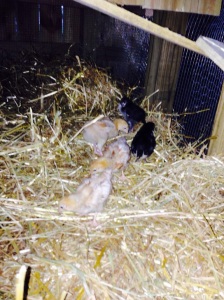 Checking outside! They really love it outside. 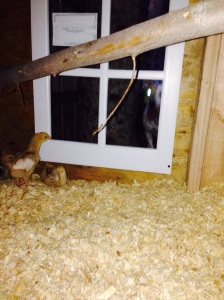 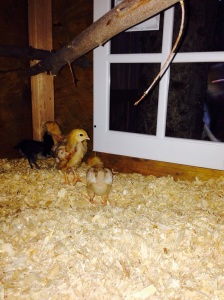 Looking to get snuggly for the night.

We are all doing great. Little miss is nearly done with school, and I can hardly believe she will be done with kindergarten! Where did the time go? I’m learning as I get older and as my child gets older the time just FLIES. She is now reading level 2 and 3 books, can count to 100 and can add and subtract. She of course learned many other things throughout the year but these were the highlights. Now we get six weeks off until 1st grade! I will post more after her last day.

This summer we (little Miss) is playing soccer, and its been going fairly well. She is still very distracted, but what can you expect from a six year old that has never played before? K is more interested in making friends on the field on both teams than kicking the ball, but at least she is having fun. The coach has only scheduled one practice so far, and its quite evident that the other teams have scheduled more practices. The team we played today had a Nazi coach that yelled the entire game. not in a mean way, but very “Dance Moms(esque)”. Click on the link… I’m not even kidding that’s how the other team’s coach yelled the entire game! It was kind of wild. I doubt she was “on crack” though…

That’s all for this week. I hope everyone is having an awesome week!