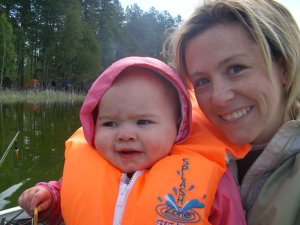 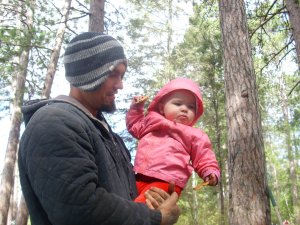 Camping was so much fun! We got headed up north on Friday about 4pm. We took 65 up to 200 and cut over by the federal dam on Leech Lake. Kirra slept the entire way from home to Bena. Once we got there to our site, there was still a bit of sunlight, and everyone helped us unload the truck. Bless Theo’s soul she had already set up our tent!
Friday we got everything settled, and Jason had to go down to Reemer to pick up Jay, Barb and the kids, because Jay’s truck broke down. He finally got back to camp around 10pm or so. That’s when Kirra went back to bed!

The next morning we woke up about 8am, had breakfast, and I took the Kayak out for a spin. I even paddled out to a bever dam on the south side of the lake. Being in the ocean kayak with a flat bottom, I was able to go around the entire thing. It was really neat to see. My aunt and uncle came for a visit too, and they even gave us a bass they caught! Theo, Pam, Kirra and I all went for a hike, and found a water reserve some where north west of our camp. Came back with several ticks, but not as many as 2008. Saturday night was extremely cold, we almost brought Kirra into bed with us, so she’d stay warm, but she was in her sleeping bag, and under about 4 other blankets, so she was nice and toasty. I had also put winter tights on her, so that she couldn’t accidently peal off her sox in the middle of the night.
Sunday the kids tipped over in the canoe (look above for the video) and I went fishing with Jason. Didn’t catch squat. Later on I took out the Kayak again, and went fishing from it, when I had paddled over to Jason’s boat. A little sunny pulled me into the reeds when I caught him! Then I paddled the entire shoreline back to camp. Where we camp is a primative sight, and we basically have the entire lake to ourselves. It’s so great! Kirra loved the fish that everyone caught. She kept saying ‘ish’ ‘ish’ ‘ish’.
Monday morning we packed up and left camp about 9:45, and this time we took hwy 2 all the way thru Grand Rapids, and to Hwy 65. We didn’t hit hardly any traffic. It was great!

Well until next time…