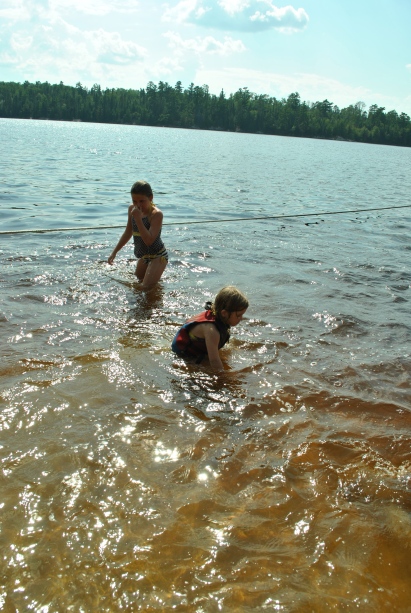 There is a reason why I don’t have pictures of my daughter swimming in the middle of the Border lakes on the Minnesota, Ontario border from last summer. My daughter was terrified of the unknown depths of the lake, and would not jump in where she could not see the bottom. She was perfectly content to stay on the beach while her cousins fearlessly leapt off the back of the houseboat, slid down the waterside, and went tubing down the watery highway. I could see it in her eyes though. The look that she wanted more, that she wanted to do those things too. I knew that she would have fun if she let go of her fear and just leapt, slid, and cruised.

I had seen her do it before many times at the park. Overcoming her fears only to be riled with glee and delight as she had that adrenaline rush of fun. But she wouldn’t budge on this.  I wish I could tell you that I just let my daughter sit on the sidelines of the boat or on shore, but instead I gently dropped her down into the waters to my sister who was there to catch her. (She did have a life jacket on), but she wasn’t having it. A few days earlier I put her on my brothers lap and off they went down the slide, but she wasn’t ready for the thrill of that either. She almost got the courage to do it again, but that was the only time she went down the slide the whole trip or swam out in the deep. In my heart I could not push her to do something she truly didn’t want to do anymore.

This reminds me of the time I wanted her to become a figure skater just like I was! My sweet cousin graciously lent me her daughters old skates so I wouldn’t be out the money for a good sturdy pair of Rydels. I packed my daughter up and drove nearly an hour south to the skating school that was run by my cousins mother, and grandmother. The same duo that I had learned from and skated with all of those years. Sure there was a skate school much much closer to my house, but my Aunt truly is the best of the best in the state of Minnesota when it comes to Figure Skating! But, my daughter was scared and disliked every minute of it. It was something that I had wanted her to do, not something she picked out. How could I expect her to face her fears if she didn’t even like the activity she was doing in the first place?

So, we followed what she would want to do and signed her up for gymnastics. Even if we would find out that it would cost us more money… After all, it is her activity not mine, and its her life, not mine. The point of a sport to me, aside from the obvious physical activity portion is to stretch them beyond where they think or can imagine they can go. To show them with hard work, dedication, and living fearless they can reach their goals. She doesn’t always get a certain skill, and sometimes has to really work for it. But I think that this teaches her patience, perseverance, and endurance. Its the reason we do gymnastics!

My daughters gymnastic coach told me not too long ago that my little miss’ favorite phrase was, “I can’t”, or “It’s too hard”. But our coach has been working with her to get a mind set of, “I know its hard, and I know its scary, but I’m going to try it anyways.” For my little miss who has been overly cautious since she was in diapers and is virtually scared to try all things that “look scary”, this is huge! I am so thrilled that she is trying her very best at gymnastics. Letting go of her fear. She is pushing herself and is even now learning how to do a handstand on the balance beam and walkovers.

On a side note – we have my daughter in swimming lessons now, and she is getting to be quite the little swimmer. Like gymnastics her favorite phrase in swimming used to be “I can’t” or “Its too hard” and would constantly swim for the instructor instead of the island, grabbing on to them with such intensity as if she was going to drown, but recently… she has had a major mindset change. Now she is striving to be the best in her class. Swim fiercely, and swim fearlessly. The island seems to be too close now, and you can tell that her little spirit just wants to soar. I can’t tell you as her mother how proud I am watching her shed her skin of fear.

As parents I think its part of our responsibility to stretch our kids past where they think they can go. As a mother, I am responsible for my daughter. How she grows up, what kind of woman she will become some day, and I can only hope to help shape her attitude. We can’t force our kids to do what they don’t want to do, but if you find that nook, that niche that allows them to leap into the unknown. Grab it, and let them live fearless.