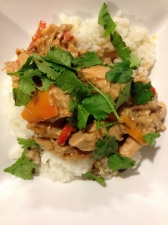 We had just eaten a big snack after lunch, so when 5:30 p.m. rolled around nobody was hungry. We decided we would just eat after gymnastics practice. Only problem was, I didn’t have a plan!

I am a total planning kind of girl. Normally I have at least two weeks of meals planned in advanced, but last night we were going rouge.

I had a hankering for Peanut Butter Chicken Wraps, which are just divine, but I didn’t have any commercially bought peanut sauce, nor did I have 1/2 the ingredients from my recipe book to make peanut sauce, so I decided to go Martha Stewart and make it up as I went. I didn’t measure anything so I’ll make complete guesses.

Chicken , maybe 4 boneless skinless chicken breasts (as much as you want, cooked your favorite way)

Mix that together until the chicken is warmed

A nice start ahead was that we had made Chicken Adobo a few nights earlier so I didn’t have to actually cook any chicken!

I placed the chicken in my large skillet and added about a splash or two of EVOO. Then I sprinkled in some soy sauce, and minced garlic.  MMMM Creamy. 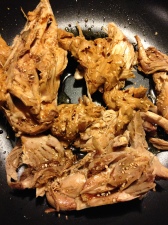 Meanwhile I started chopping up some bell pepper. Honestly, mushroom, kale, onion, broccoli would work well in this dish as well. Once I was done rough chopping I threw that in the skillet as well.

After a while I noticed the peanut butter sauce was very very thick, so to lighten it up I added about a cup or so of chicken broth until light and creamy.

Now. You could serve in a lettuce wrap right here and be done with it.

But I cooked up some rice, and served it over rice, topped with cilantro, and since I like all things spicy I added some crushed red pepper to my dish to make it really come alive.