Last Friday my co-worker and I blazed up I-35 to Tettegouche State Park north of Beaver Bay, MN, near Illgen City, MN. 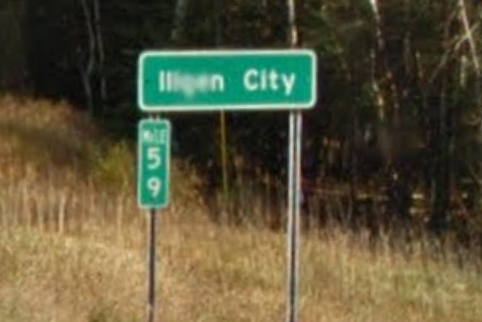 We wanted to get into cold tenting, lengthier hiking/snowshoeing and adventuring that perhaps our husbands, and children may not be up for, but chose March to ease into the scene.  Well – here was the weekend forecast!

So as you can see, it was hardly winter camping, and much closer to the temps I experienced on our Spring BWCA trip!

Upon arrival I was instantly impressed with the Tettegouche visitor center as it is pretty fancy boasting  a gift shop as well as coffee cafe for your morning needs! (I did pack in Starbucks VIA, but just in case, it was comforting to know I could get a hot cup of Joe in a pinch!)

The campsite we reserved was approximately 400 feet from where we parked our car  -or 25 rods for you canoeists on my reading list!  My friend Breanne stopped and said, “Oh Lindsey… oh… is this going to be okay….?” 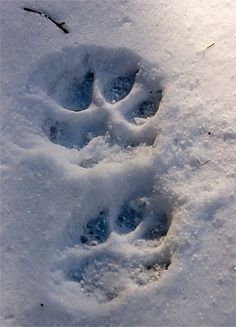 It was so obviously a wolf print… which I am notoriously terrified of (even though it is my favorite animal… ) but I sucked it up and forged on.

There was quite a bit more snow than I was anticipating, so while the temps cooperated in the high 30’s’s-50’s during sunlight, we still had loads of snow to contend with! 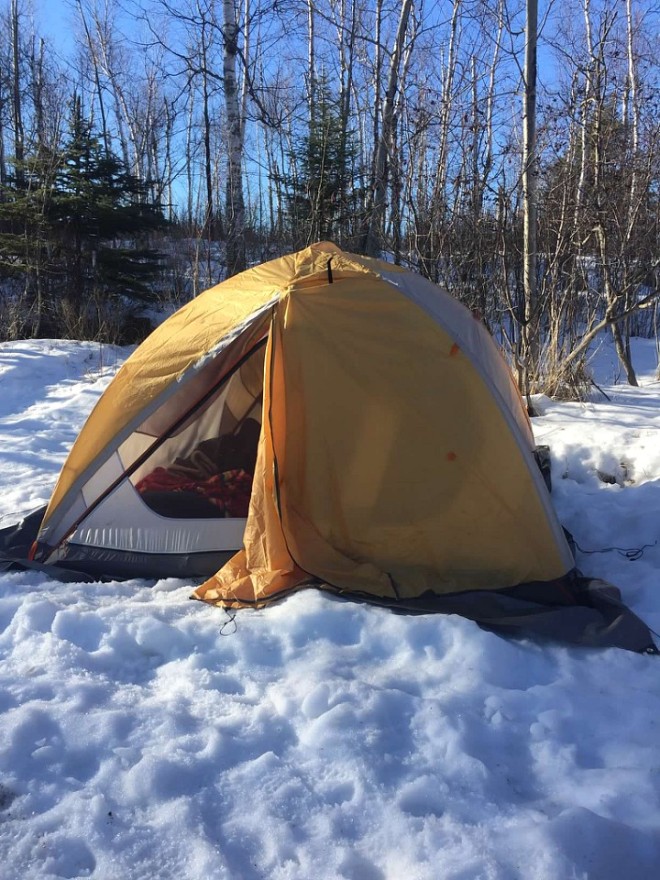 After we got the basics of camp set up we hiked out to the High Falls of Tettegouche!

It was probably a a 1.0 mile hike or so from camp, but with the ice and slippery conditions, it felt much further. We had left our snowshoes behind, so the going was very very slow and slippery. The falls were amazing though!

Unfortunately my phone had died due to the cold temps and the listening to Spotify on the way up… so I didn’t get a nice shot. Perhaps I’ll add one of Breanne’s photos in the future!

That night we cooked up some macaroni & cheese, and I heated a brat for some protien. I made sure to buy plenty of wood, so we had a nice fire going as we embraced the stars of the Big Dipper and Orions Belt! As always it was so amazing to see Gods creation on full display in the north woods!

That night I had a hard time falling asleep thinking – “Two girls – alone in the woods on the north shore…” – makings of a horror movie, or the wolf print I had seen earlier in the day sent me into qualms of wolf packs surrounding our tent waiting to devour us!

After much tribulation I finally fell asleep and was ready for a full day of hiking on Saturday!

I happily slept in until 7:30 or so with the sun blasting on the tent!

Though it was in the 30’s the sun made all the difference in the world, and it was utterly pleasant and amazing waking up! 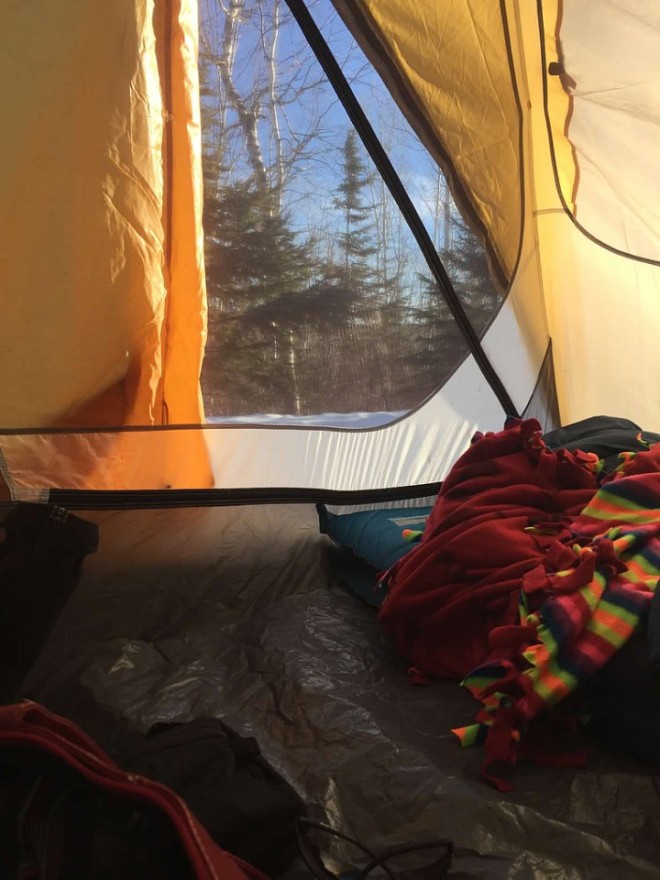 Breanne and I had each pre-made breakfast burritos wrapped in tinfoil that we were able to heat up over the fire for a super amazing breakfast. She had her chilled espresso, and I heated up some hot water to add to my Starbucks Italian Blend coffee! YUM!

After we got everything cleared from breakfast after pouring over maps we headed north on Hwy 61 to the Caribou River wayside rest parking lot which meets up with the SHT and Caribou Falls!

We definitely opted for snowshoes and I was happy to also have my ski-poles.

Hiking on the SHT was a new “bucket list” item for me, so I was super pumped after reading Wild & A Walk in the Woods! We hiked up some fairly icy conditions fully trusting in our crampons on our snowshoes to Caribou Falls and were instantly impressed with the sights!

The photo below doesn’t even slightly do a justice! The elevation on the rocks was impressive, and the water shooting out of the snow/ice was full of strength! I just stared in wonder and awe at God’s creation wondering how on earth I was so lucky to see it first hand! 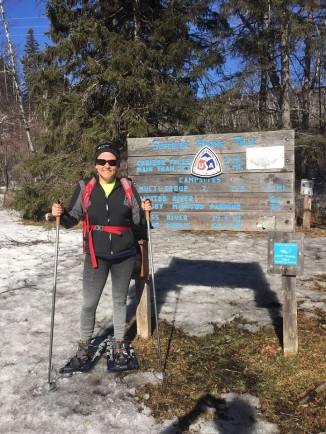 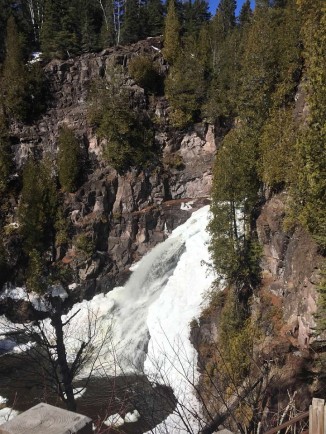 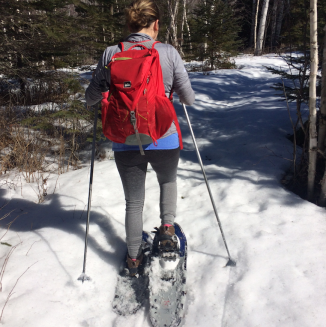 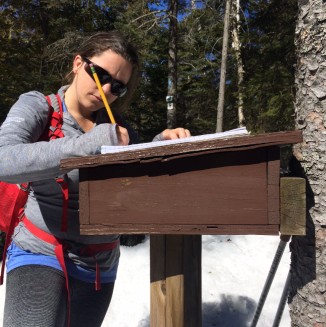 We snowshoed on for another hour or so north on the SHT until we were blazing our own trail for quite a time, and making little to no forward progress. When we fell through with our snowshoes it was at least knee + deep so we decided to turn back as there was much more hiking right at Tettegouche and we wanted to check out Coho Cafe in Tofte! 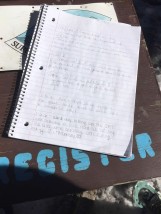 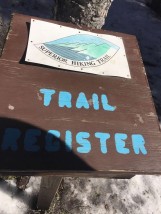 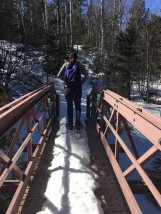 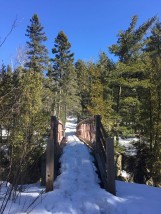 After our coffee – etc we headed back to Tettecoughe and headed out to Shovel Point, and down to the confluence of the Baptism River & Lake Superior! 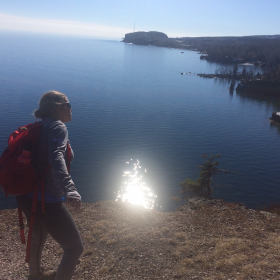 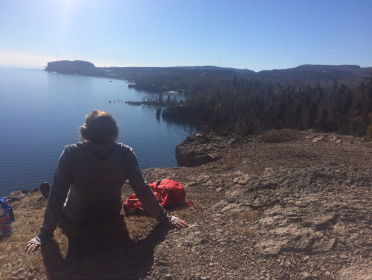 Watching the river hit the lake was absolutely mesmerizing, and if i had a more comfortable chair I could have easily spent hours there.

After some time we decided to head back and hike up to the SHT out of Tettegouch to an overlook. We were very glad we had our snowshoes as hiking was ridiculously difficult, and the hike up to the overlook seemed impossible in the winter conditions. We figured in non-snow conditions it would be a quick jaunt up the hill, but we weren’t able to make it, so we headed north on a Tettegoughe path – but we were narrowing in on 8.5+ miles and I was growing increasingly tired, so we gave up on anymore lookouts and headed back to camp for a fire, wine, and yellow split pea soup over the fire!

Unfortunately due to the very warm temps our campfire was 1/2 flooded with water/snow melt. We had to build up an island of sorts to get a fire going. After some time, we were able to get a fire going to heat up our food, but we lost hope for an evening burn and retired to the tent around 7:30 for reading and camaraderie.

After lamps were turned off I was able to sleep until about midnight or so… then I woke up with a terrible urge to ahem – use the ladies room… but the wind was howling fierce, and I grew ridiculously terrified of the elements.

My campmate was fast asleep so I tried with all my might to rest.

3:50 I woke again  terrified at the sounds around me. The tent was flapping in the wind Blair Witch style, and I could hear branches falling around me. This was not good.

I tried to fall asleep again, but couldn’t so I turned to the Psalms for some comfort.

Psalms 3:3 – But you, O LORD are a shield around me; you are my glory, the one who holds my head high.

Psalms 3:5 – I lay down and slept, yet I woke up in safety for the LORD was watching over me.

Psalm 4:8 – In peace I will lie down and sleep, for you alone, O LORD will keep me safe.

And I drifted back to sleep.

5:00 a.m. rolled around and the wind was whipped up again racketeering in our camp, and we were both up now, so we were able to complain and kvetch in solidarity. She gave me a few tips on falling back to sleep such as playing the alphabet game.

So I tried it and it did work! I named all (except one or two) lakes in the bwca twice and things to pack/bring with/encounter on a BWCA trip. It definitely did help to fall asleep.

We woke up for the finality around 8:00 am (so 7am pre-daylights savings time) busted down camp, and headed for the car.

I loved our winter camping experience during the sunlight hours- but the evenings were a bit of a struggle for me.

We had a 4 man tent for the two of us, which I thought was adequate for co-worker friends. Perhaps if it was my sister I would opt for a smaller tent, but we had quite a bit of stuff between us that it seemed to fit the two of us perfectly!

Pre-cooked meals or maintenance free meals seemed to be key! I loved the breakfast burrito that was fully cooked and only needed re-heating in the fire- same goes for the soup.

I think in the future – I may opt for a more “in-camp” experience so if I have to go to the bathroom in the middle of the night – I might actually get up and go. There was no way I was going out in the “wilderness” to pee with the howling wind and wolf tracks. No way!

Had zero degree sleeping bags with an extra one to spare if I got too cold, but just used the one. Temps were down to 25 or so… much colder than that  and I would need a more robust system.

Slept on a Thermarest closed cell mat, with my Exped 7 on top of that. I was very cozy.

Would I do it again? Probably!

The sights and sounds during the day were such a blessing though – that they combated any fear I had at night! I would make some tweeks I’m sure – such as perhaps staying “in camp” or in a camper cabin… but all in all it was an amazing experience!