I wanted to embark on this holy journey from my friends Greg & Kelli’s place in Duluth. I used to work with them at TCM, but since they moved to Duluth in the Chester Park neighbourhood. I thought this would be a good launching point.

Though the new official start of the SHT begins down at Jay Cooke, I’m a traditions kind of gal and starting near the official Martin Road seemed as good as any place to start. Launching this adventure from the comforts of Greg & Kelli’s however, with a glorious Hot cup of coffee in the morning = priceless.

I suppose it was sometime during the fall of 2015 or spring of 2016 when I got this ridiculous urge to hike the entire Superior Hiking Trail by the time I was 40. Kind of this 40 in 40 idea of spending 40 days in the wilderness the year I turned 40.

After realizing that would be too much time away from my family I decided to break up my SHT(y) plans and focus on spending 40 NON-CONSECUTIVE days out in the wilderness!

Knowing also that I wouldn’t be able to take an extended leave at this time to do the whole thing I conjured up this notion that I could hike approximately 4-5 sections each year and then on the year that I was actually 40 finish it off in a 10-12 day stretch.

So off I went after work to Duluth Minnesota. I hadn’t taken a solo, longer road trip since high school, so it was kind of weird adjusting to the solo ride. I blasted my radio however and sang along on top of my lungs! It was pretty exciting.

I arrived to Duluth around 6:15 pm our so and swung into Duluth Pack for a few quick items, and then enjoyed dinner on the patio of Canal Park Brewing with Kelli & Greg and their dog Gracie. If you haven’t been there before – drop what you’re doing and go enjoy a mango habanero burger and a glass of Malbec on the shores of Lake Superior!

We headed back to their place to re-pack our packs for our overnight camping adventure and laughed ourselves silly until finally, it was time to retire for the night.

I was awoken by soft light coming in through the bedroom windows with the white curtains. It was so peaceful, but I was eager to hit the trail. Kelli’s sweet fiance/ my friend Greg made us all coffee and before you knew it, I was dropping my car off at Normanna road, and Kelli drove us back to Martin Road.

We snapped a photo and we were officially off on the trail… except I noticed we were heading south when we should be heading north. Realizing that we turned around to head back to the parking lot to regroup. We noticed another trail leading the way towards Lismore Road. Now we’re in business!

Right off the bat we are trudging through the North Shore State Trail (NSST/Snowmobile trail) that was fully logged with water. Within our first few steps our feet were already wet, and poor Kelli wore trail running shoes. Luckily I had on my waterproof Keen hiking boots, so I was mostly okay.

This first section was all along a grassy trail that clearly was a snowmobile trail when we saw signs that said, “Speed Limit – 30MPH” – okay – we’ll try to keep our hiking speed under control!

This is definitely not what I remember the SHT trail to be, but in order to do the whole trail one must endure the sucky parts too. This definitely is a sucky section that is nothing to write home about – or maybe it is.

I had recently purchased some new Black Diamond hiking poles that were pretty highly rated, but I found them to come apart every time they got stuck in the mud. I was getting annoyed. I thought I had a great piece of equipment but apparently not.

The tall grass was full of poison oak and poison ivy which was nearly unavoidable. I also imagined that once we got to camp we’d be covered in ticks.

Soon the sun dipped behind some clouds and an eerie feeling of being watched come over us. We tried to talk Kelli’s wedding plans, but soon it was apparent that we were deep in wolf territory with not just this one, but many many piles of scat. Perhaps a wolf superhighway! 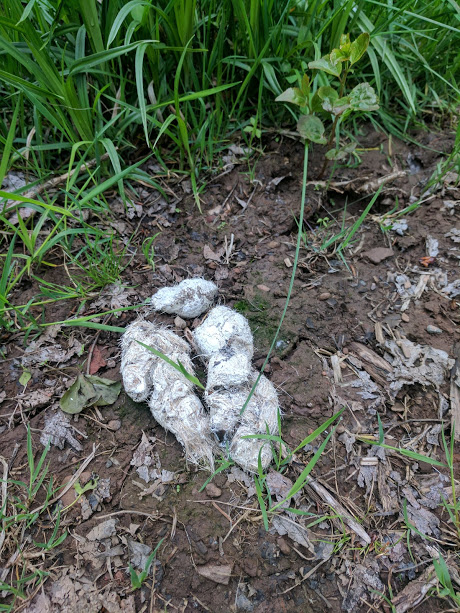 Eventually coming to a pond I remarked that I thought we were getting close to the Bald Eagle campsite. We looked around but saw no sign for a spur trail to the campsite.

Soon after we came to the Lester River were we had planned to camp for the night. Knowing it was supposed to be amazing for hammock camping I was surprised by the snowmobiles shelter, and vault toilet with walls and a door. Thinking there is no way this could be the campsite we kept walking to find it.

FINALLY – we saw a sign to get us off the God-forsaken NSST and onto the single track SHT trail through the cedar groves. Red roots abounded, and the coolness of the deeper woods was welcoming.

My pole got stuck in the mud – yet again, but this time I realized one pole was much longer than the other – oh! I guess if you pull the handle all the way up it locks in place! Hooray – no more collapsing poles!

We kept looking for signs for a campsite and were surprised when we came up to Lismore Road! What? How did we pass two campsites! Ugh. We put our packs down in the parking lot, and had lunch.

Realizing it was only noon, and we hiked 7 miles in 3 hours we decided instead of back tracking a mile or so to find the campsite, we’d press on to the next campsite Lone Tree closer to Normanna.

So hike and hike we did. Leaving the Lismore parking lot we had to hike along Lismore for a half mile before being dumped right back onto the evil NSST. Again it was FULL of water, and the mosquitoes were complete kamikaze’s and unrelentless! Eventually, I had to drop my pack and spray an angry amount of Deet on my arms while teeth gritting – muttering with force, “take that ass-holes”.

Eventually, we meandered through the woods through a logging area. It was acres upon acres of decimated forest. It was kind of sad and spooky.

Soon we were hiking down a “logging road” and were growing tired with deliriousness. I finally said, “I have to sit down”, so I sat down, but it wasn’t comfortable, and I exclaimed, “Watch – the campsite is around the next corner”, and it was!!! Eventually, we came upon the “Lone Tree” campsite, and relaxed. Dropped our packs and were like YES!!!!!!

Unfortunately, though it was not conducive to hanging two hammocks for camping. Utterly demoralized we retreated to the fact we’d hiked our 20-30# packs for no reason at all…

Soon a fellow gal hiker came up to our camp who was actually thru-hiking the trail all at once, and today was her day 1. She was surprised to see other hikers as the only people who even hike this section are those doing a thru – or section hike like myself.

We shared some memories from the trail and how bad it sucked and soon we were off towards my car.

More logging, and more miles and miles of the grassy bull crap. 😦

Finally we made it to my car where we chugged gallons of water! We decided since we were jipped on camping on the trail we’d head over to Gooseberry Falls State Park to camp for the night. So, after a decent relaxation session in the car –  we drove over to HWY 61 up towards Two Harbors, under the tunnels and to Gooseberry (after a stop at Dairy Queen for a hot dog and a Blizzard!) on our way. 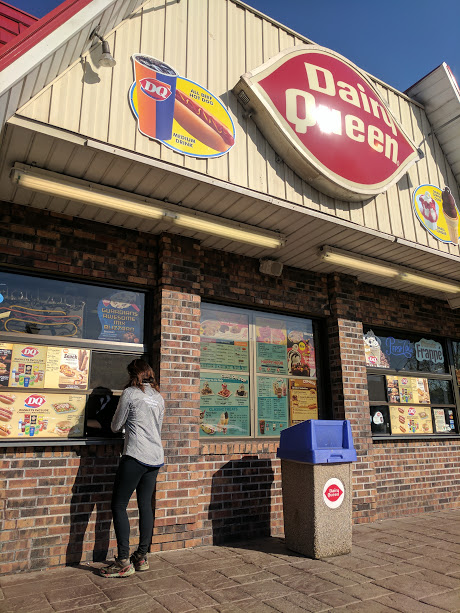 So we checked out Split Rock. FULL. Jay Cooke – FULL.

So I dropped Kell off at her car and made it home to the Twin Cities by 10:15pm.

All in all it was a great trip, with amazing company! I hiked in my heavy pack for no reason at all – but it was great training for my BWCA trip later this summer. Portages will be a cake walk after this!

Lets do it again next month!